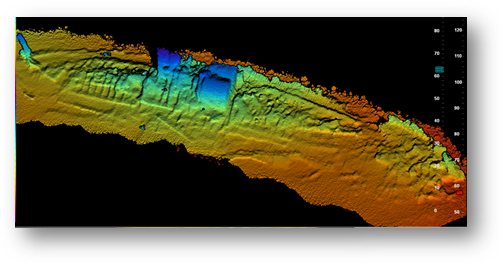 “The level of detail and clarity from the sonar survey is amazing,” Robert Schwemmer, NOAA West Coast Regional Maritime Heritage Coordinator said. “[w]e now have a much better sense of both wrecks, and of how they not only sank, but what has happened to them since their loss.”

NOAA was first introduced to the Echoscope® technology in 2013 when Coda Octopus provided a 3D image of the MV Fernstream wreck also in San Francisco.  After evaluating this detailed, 3D image NOAA was able to more accurately assess the potential environmental threat and take appropriate actions. The Echoscope® is a volumetric sonar that produces over 16,000 sonar beams per ping, enabling it to provide real-time geo-referenced mapping and images.

Real-time 3D detailed images enable users to make immediate assessments, see features that may not be shown by other sonars and to adjust their dynamic survey to further reduce shadows and see more details immediately.

Blair Cunningham, our President of Technology, said, “[w]e are extremely pleased with the outstanding images provided during these surveys. The Echoscope® has proven to be an excellent archaeological tool, providing unequalled imaging.  We look forward to working with NOAA`s Office of National Marine Sanctuaries on future shipwreck searches and other applications. The Echoscope® real time 3D sonar is again delivering real-time unparalleled imaging to our customer.”

Originally founded in 1994 as Coda Technologies, the Coda Octopus Group is now headquartered in Lakeland, Florida.

The Group consists of a Marine Products business located in Lakeland, Florida, Edinburgh, Scotland, Perth, Australia, and Bergen, Norway, and engineering businesses, Coda Octopus Colmek in Salt Lake City, Utah and Coda Octopus Martech in Weymouth, England. Each of the Group companies are technology innovators with a particularly high level of sonar expertise. The Group has facilities in Florida, Utah, the UK, Australia, and Norway.

Alongside providing bespoke engineering and development for defense applications one of the Group's key products is the patented Coda Echoscope® - the first real time 3D sub-sea sonar which is used in oil and gas, underwater construction, search and rescue operations and port and harbor security and constructions. The top end software which runs on the Echoscope® (Underwater Survey Explorer) is also proprietary to Coda Octopus. The Echoscope® is also at the heart of the Underwater Inspection System which is being adopted for port and harbor security, and other applications globally. We have a number of products which are based on our real time 3D technology (Echoscope®, Underwater Inspection System and Dimension® (the latter being a forward looking real time sonar targeted at ROV applications)).